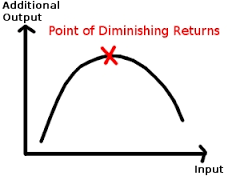 My Dad used to work at BAE systems and knew a guy who used to check the noise levels generated by jet engines. One jet engine at full blast in a hanger would create x amount of decibels. If you added another engine and revved that up to full whack you would not double the amount of noise but it would increase by maybe 60%. A 3rd engine at full whack would add another 20%. If you then added a 4th engine into the mix the increase in sound was so minimal you could not really tell the difference. So 3 engines running at full whack to all intents and purposes was just the same as 4.

This is a great example of how the law of ever diminishing returns works. You keep adding more input for ever decreasing output.

So how do we apply this to training?

For most training sessions most of the training stimulus occurs in the first half of the session. Take for an example a sweet spot session. Sweet spot is a powerful aerobic training zone at roughly 90-100% of FTP.

Let’s say I have a CTL of about 90. That means in theory I could just about do around an hour and 40 minutes of sweet spot which would generate a TSS of 160. All of that session would in theory be within the window of what I am capable of absorbing. But I would find it exhausting and it would leave me feeling pretty smashed for about 48 hours. During that period my immune system would be quite low and the risk of picking up a bug fairly high. Would it be worth it? Probably not.

Most of the stimulus to adapt would come in the first 45 minutes of that session. The remaining 45 min might add another 10% and the draw back from that would be feeling like crap for a long time afterwards.

By levering the law of ever diminishing returns and making the best of that initial 45 minutes I could maybe do 45 minutes to an hour max one day and then repeat that the next day.

In total over 2 days I would have done the same amount of work as I may have achieved in a one off session but by really levering that powerful first half or so of the session overall I will got a better training effect AND by spreading it over 2 days I’ve made it easier for my body to absorb it.

I have seen riders really utilise the law of ever diminishing returns by building a fantastic base of fitness off a daily commute to work. Say you ride an hour in in the mornings and an hour back in the evenings and 40 min of each of those rides is at tempo. Overall that’s about 6 hours of tempo a week. By and large you will see a better training effect from this than you would say by doing 3 x 2 hour tempo rides and nothing else.

Training little and often is usually better than training less frequently but with big bad training sessions.
The latter approach usually leaves you feeling pretty wrecked, often ill and even though you feel that you’ve been really pushing your body hard (and you have) you never seem to get much payback from it.

So if you’re pretty time starved and just don’t have the time to disappear for long 3 to 4 hour training rides. Don’t worry. If you can manage to find the time for 30 to 60 minutes and you can do that very regularly by training smart you can do very well off that.

Most people who are training more than around 10 hours a week really are just riding for the sake of it because much of that work really won’t be doing anything more than leaving them very tired and fed up!