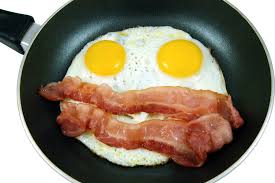 Question: In a bacon-and-egg breakfast, what’s the difference between the Chicken and the Pig?

Answer: The Chicken is involved, but the Pig is committed!

It’s coming up to the point in the year where I start to get inquries from people wanting to be coached. I’m very selective about the riders I take on and the first thing I try to ascertain is – do their goals and expectations tally up with the reality of how much effort they are willing to put in? If the answer is no – well it doesn’t matter how well I do my job, I will never be able to succeed.

Here is an example of a rider who I think I could do a very good job with.

“I work 50 hours a week in a physically demanding job, I have 3 kids and realistically I have 6 hours a week to train, usually 3 x 1 hour sessions in the week and a 3 hour ride at the weekend. I can’t really manage more than this because around my other commitments if I try and do more I end up exhausted and ill. I have been riding 10 and 25 mile time trials all season and I have an FTP of around 280 watts. I think with the help of a coach and some structure and objectivity to my training I could maybe push that FTP up to closer to 300 watts, take a minute from my 25 time and move up from a top 10 rider in open events to a top 3 rider and maybe even win the odd event’’

This rider has expectations based on reality. Adding 20 watts onto FTP with only 6 hours a week to train is a tall order but not impossible. The rider has clearly laid out how much time he can realistically put into training and his / her goals tally with that. In short they have thought not only about what they want to get out of their training but what they actually want to put in. They have sat down and thought it through without drifting into the realms of fantasy.

Here is an example of a rider who I won’t be able to help. I often get enquiries from riders like this.

“I have up to 15 hours a week to train. I am willing to do WHATEVER it takes to succeed. I am 110% committed to winning and I will make whatever sacrifices are required. A few years ago I used to beat Tom, dick and Harry but now they beat me and I don’t like it. Next year I want to be winning time trials from 10 to 100 miles and I also want to move up from a 3rd cat to a 1st cat and win some crits. I always go out on a club run every Sunday that’s 100 miles long and I can only train in the evenings at 8 pm after the kids are in bed. I live in central London so can’t train on the road in the week but I can easily do up to 2 hours a day on the turbo’’

Alarm bells now start to ring in my head.

I review their past training in training peaks and low and behold it is a cycle of periods of huge amounts of training which is too long, too intense or both followed by large periods off the bike due to either illness or lack of interest or both.

This rider loves the idea of winning. They have an image of themselves lifting trophies and being the general big I am. This is what they want. They don’t actually want the reality of the work that would go into achieving those aims. They say that the will do whatever it takes to succeed but the reality of that would mean halving the hours they work, not going out and thrashing themselves with their mates every weekend and very probably giving up lots of other things they enjoy. This rider lives in a fantasy world where anything is possible. You can have it all, all the time. Good luck with that.

In the past I have taken on riders like this. After a while once the initial enthusiasm has worn off the complaints start. This is too tiring, this is too boring. Then the excuses start for missed sessions then a few months later its good bye coach. I need a break to get my enthusiasm back.

6 months later they contact another coach with the basically the same e-mail I got and the whole unproductive, sorry cycle begins again.

If you look at the people who are winning races week in week out more often than not those wins are paid for by a huge amount of graft. Week in, week out consistent, tiring work. Those riders pay for that success by sacrifice in other areas of their life. Maybe they don’t have kids, or maybe they don’t work as many hours as you. Maybe they aren’t also pro-am golfers like you or studying to be a brain surgeon in the evenings like you.

Does this make them better than you? No they are simply totally committed to total success in one area of their life and as a result doing better in that one area than you.

Before getting into a training programme we have to decide our level of commitment. Some of really will be like the pig in the fry up. We may be at a point in our lives where we not only want to dedicate a lot more of our energy and time into the bike but we are in a position where we can do that.

But most of us with lots of other commitments need to look at the things in life that we have to do and the things that we really enjoy and don’t want to give up. Not to mention sleep and just chill out time. Then we need to look at what is left and that is what we can put in. Then we need to make sure we get the very best out of that time and this where a good coach comes in.

Would I like to win more races? Hell yeah.

Would I like to up my weekly training hours from around 8 hours to 12 or 13? Not really

Would I like to never go out with my mates every few weeks for a few (6) pints? No I like that, even at the cost of the hangover.

would I like to stop lifting weights in the garage even though it does jack for my cycling but I enjoy it? No. I like how it makes me feel even if it adds a few pounds of muscle that makes me less aero on the bike.

Would I like my family to resent me because I’m never around and always on my bike? Definitely not.

So I need to make sure that the 8 hours I do have is as productive as it can be. I can still do pretty well in time trials off that and at the end of the day coming in the top 5 in open events is a lot better than scraping into the top 20 which is what would happen if my 8 hours was badly planned or if I tried to do more hours and ended up ill and inconsistent.

At the end of the day I would much rather be a happy, balanced chicken than a miserable pig!